I discuss with Ruthanne Huising and Pedro Monteiro from EMLyon the challenges of studying work ethnographically. I reflect on my tactics to study work which today is increasingly happening offline and online at the same time. We also talk about the importance of in-depth qualitative research on digital technologies and AI in and around organizations to offer more nuanced views on the changing nature of work in the digital gig economy. You can find many more free podcasts like these here!

Here’s a really cool podcast from TORCH, the Oxford Centre in the Humanities, University of Oxford that I’d like to share on my site:

I was part of a panel at a Launch event for Futures Thinking, a new research group looking into future problems and opportunities created by advances in technology and artificial intelligence. If you go to the website, you can find many more free podcast videos like these!

Routinely ranked as one of the greatest movies of all time, Charlie Chaplin’s 1936 film “Modern Times” balances great physical comedy with powerful social commentary. Playing his famed “Tramp” role for the final time, Chaplin portrayed a hapless Worker on an assembly line who is tormented both by supervisors and the work itself. After being subjected to a humiliating experiment intended to improve the line’s efficiency, the Worker runs through a series of rotating jobs, stints in jail, and other misadventures as he tries to find his purpose in life.

He eventually finds his purpose through a growing relationship with the Gamine (Paulette Goddard), a tragic young woman orphaned after a worker’s strike turns violent and kills her father. She escapes becoming a ward of the state but resorts to stealing to survive until caught by the police. After the Worker sacrifices himself to save them, the two would become inseparable. Seeing a happy couple in a well-to-do, they imagine themselves being happy and carefree living together in a rundown falling-apart shack. But in the end, she cannot hide from her past as an escaped orphan. Destitute and alone, the two find themselves on a barren road — she appears to have given up on life, but the Worker convinces her to continue on and try again. They leave, walking down the road to who knows where?

As we viewed the film, our initial thoughts were about how Taylorism is portrayed and critiqued through the scenes at the factory and the social turmoil going on outside. But the film actually touches on many of the themes of this podcast. Referenced throughout the episode were Taylor (Episode 1), Maslow (Episode 3), Max Weber’s Bureaucracy (Episode 6), The Hawthorne Studies (Episode 9), Banana Time (Episode 13), Suchman’s Human-Computer Interactions (Episode 22), the Gig Economy (Episodes 18, 36 & 40), Socialization a la Van Maanen (Episode 38), the Garbage Can Model of Decisionmaking (Episode 39), and Kunda’s Study of Tech Culture (Episode 49).

Listen as we discuss this fantastic and powerful film whose insights on work and society are still relevant today! You can find many more free Talking About Organization Podcast episodes here!

2018 TAOP episode celebrating 50th episode: What have we learned?

To mark this occasion, we gathered all seven of us hosts to discuss what we like (and perhaps not) about the podcast and podcasting, what our favorite or most remembered episodes were, and what we have learned along the way.

Turns out, one of the key things we learned was how much such a small number of dedicated scholars and practitioners can do with a lot of motivation and energy. As we discuss, there were many in the beginning who scoffed at the idea of podcasting on classic and emerging organization theories and concepts of management science. But with over 12,000 active listeners worldwide, Talking About Organizations has proven to be useful and entertaining all at once.

We hope you enjoy this brief retrospective. Here you can find many more free Talking About Organization Podcast episodes!

Originally published in 1992, Gideon Kunda’s ethnographic study of a high-tech corporation altered the discourse on organizational culture. “Tech,” the firm being studied, was a firm on the rise and saw itself as a leader and ground breaker in the rapidly growing high-tech industries of the 1980s. But as the firm grew from a modest couple hundred to tens of thousands of employees and multiple sites, Tech undertook an effort to indoctrinate its members with its tried-and-true formula for success — hard work, sacrifice, and belief in the company. The degree to which this indoctrination occurred was extensive, from the choreographed leader messages, trained cultural experts and internal publications to the highly competitive and cut-throat nature of project work. Kunda captured it all in gripping detail.

The centerpiece of Kunda’s thesis was Tech’s exercise of normative control. This was ironic in a way given how Tech’s professed culture valued self-determination and autonomy. But, the rewards and sanctions were constructed to enforce a particular form of autonomy, one in which Tech extracted the most out of its people while breaking their lives in the process.

Does this mean ‘normative control’ as a mechanism for mission accomplishment is bad? As we dove into the text and applied its lessons to present-day matters, the question is actually difficult to answer as there are many factors to consider. Listen as we wrestle with this extraordinary and provocative text!

“Who are we?” The pursuit of an answer to this tantalizingly simple question began with a book chapter written in 1985 by organization theorists Stuart Albert and David Whetten. “Organizational Identity” established the construct of identity at the organizational level and described it as the sum of three types of claims — claims of an organization’s central character, claims of its distinctiveness from other organizations, and claims of temporal continuity that tie the present organization to its history. The chapter also raised the idea that organizations can have multiple identities, which each being more salient at different times. With seven key research questions and thirty-three hypothesis, the chapter also laid out a far-reaching research agenda.

But as we discuss in this episode, the twenty years that followed saw much of the research yield lots of confusion and consternation. David Whetten would prepare a follow-up commentary in 2006 to clarify and update the construct while addressing the conflicts.

So how useful is it? Listen in as we grapple with answering questions like, “Who are we as the Talking About Organizations Podcast?” using Albert & Whetten’s construct as a starting point. We then follow with examples, case studies, and uses of organizational identity in both scholarship and practice. We hope you enjoy the discussion and find it useful for understanding the deep culture of organizations.

2018 TAOP episode on TCE and boundaries of the firm

We explore an important reading that bridges organization theory with economics. This was the explicit aim of Oliver E. Williamson’s famous article, “The Economics of Organization: The Transaction Cost Approach,” published in the American Journal of Sociology in 1981. The article begins with a statement that the assumption of firms operating on a profit motive has not helped organization theorists understand and explain the behaviors of firms, and that economists were also finding themselves similarly limited. He thus set out on a different path and argued that transactions, not the products or services the firm provides, is a better unit of analysis.

In the discussion, we wrestle with Williamson’s central arguments and proposals, such as the construct of the efficient organizational boundary, human asset specificity and the difference types of governance structures related to it, and how markets and hierarchies represent different choices for organizing. We also explored a related article presenting early thoughts about the growing impact of rapid advances in information technology on firm and market structures. Written in 1987, Tom Malone et al.’s “Electronic Markets and Electronic Hierarchies” presages the modern online economic environment and its many virtual interactions between seller and buyers. This fascinating extension of Williamson’s ideas made a number of predictions. How many came true 30 years later?

2017 TAOP Symposium on the Gig Economy

The aim of the symposium was to advance understanding of the sharing/gig economy, with particular attention to its relation to the classics in management and organizational scholarship; as well as to explore methods suitable to grasp the sharing/gig economy as an object of inquiry. I was part of a panel discussing different methodological approaches to studying the gig economy (part 3). Here you can find many more free Talking About Organization Podcast episodes! 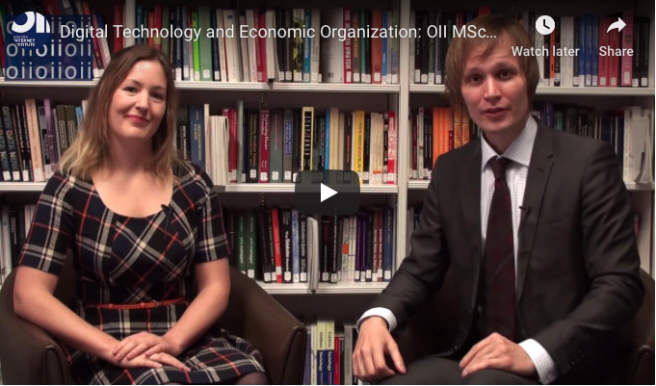 In the video, me and Vili Lehdonvirta introduce our MSc course Digital Technology and Economic Organization.